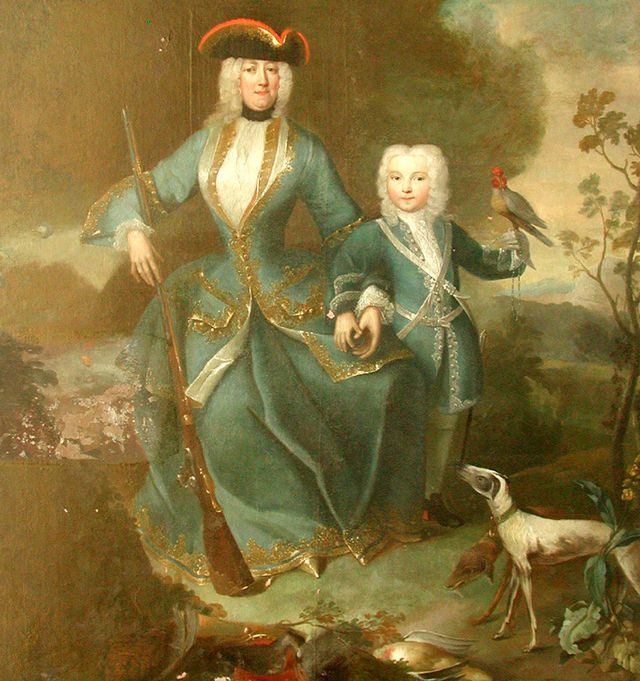 On 6 December 1701 Princess Eleonore married the Austrian Hofmarschall, Adam Franz Karl Eusebius, Hereditary Prince (and later Prince) of Schwarzenberg. Eleonore was considered a cultivated woman, and her and her husband's wealthy and cultured lifestyle was often displayed at court. The marriage produced two children:

Maria Anna of Schwarzenberg (1706–1755); married Louis George, Margrave of Baden-Baden in 1721.
Joseph I Adam of Schwarzenberg (1722–1782); married Princess Maria Theresia of Liechtenstein (1721-1753) in 1741.
After 21 years of marriage her husband was killed in a hunting accident on imperial land near Brandýs nad Labem-Stará Boleslav, today in the Czech Republic. Emperor Charles VI fired the deadly shot, and the prince just happened to be in the way. Afterwards, the emperor took Eleonore's son to his court in Vienna, and she was paid a baronial maintenance of 5,000 guldens.

Princess Eleonore died on 5 May 1741 in the Palais Schwarzenberg in Vienna. Franz von Gersdorf, the emperor's physician, requested an autopsy from which the cause of death has been diagnosed as cervical cancer.

In 2007, the Austrian documentary The Vampire Princess analyzes the legend according to which Eleonore was a vampire. This report by Klaus Steindl, broadcast on the European channel Arte, claims that Princess Eleonore could be one of Bram Stoker's sources of inspiration for his character of the vampire-princess Lenore, in his gothic novel Dracula. In fact, suffering from a mysterious ailment which made her suffer greatly, the princess spent fortunes on remedies based on potions, but also on esoteric and magical formulas that the Church disapproved of which fueled rumors about a " evil of the vampires ”which she allegedly contracted from one of these monsters.

For their part, the authorities feared that the illness from which she was suffering, and which was worsening, would spread. Doctor Franz von Gerstoff, doctor of the Emperor, went to his bedside and decided on his transfer to Vienna. After the death of the princess, an autopsy was performed (rare for the time, perhaps to silence rumors) by dissecting her entrails, swollen, and removing her healthy heart. She was therefore religiously buried in the chapel of Saint John of Nepomuk of the St. Vitus Cathedral of Krumau, but all the same in a tomb sealed by a masonry vault of an abnormal thickness, under a tombstone engraved with a head of dead!

Much later, his great-grandson, Karl Philipp, Prince of Schwarzenberg, will be the victor of Napoleon at the battle of Leipzig, in 1813.

It was not until the 20th century that analysis of the symptoms and re-reading of the autopsy reports identified his disease as colon cancer and nothing that we had previously imagined.

Source:  Girl In The Tiara

"In the Czech language. You still have to understand"

[EN] We use cookies on our website to give you the most relevant experience by remembering your preferences and repeat visits. By clicking “Accept All”, you consent to the use of ALL the cookies. However, you may visit "Cookie Settings" to provide a controlled consent.

This website uses cookies to improve your experience while you navigate through the website. Out of these, the cookies that are categorized as necessary are stored on your browser as they are essential for the working of basic functionalities of the website. We also use third-party cookies that help us analyze and understand how you use this website. These cookies will be stored in your browser only with your consent. You also have the option to opt-out of these cookies. But opting out of some of these cookies may affect your browsing experience.
Necessary Always Enabled

Performance cookies are used to understand and analyze the key performance indexes of the website which helps in delivering a better user experience for the visitors.

Analytical cookies are used to understand how visitors interact with the website. These cookies help provide information on metrics the number of visitors, bounce rate, traffic source, etc.

Advertisement cookies are used to provide visitors with relevant ads and marketing campaigns. These cookies track visitors across websites and collect information to provide customized ads.

SAVE & ACCEPT
Powered by

To access this website, you must be aged 18 or more.
By giving an affirmative answer, you confirm being of age.
Are you 18 years old or more?